Sometime in the near future, in a world where governments and organizations blur the line between national security and ethical behavior, paraplegic prison inmate Matt Mills meets "The Board" of Satoshi-Telefair Industries, who thank him for joining the Program. Under pressure and with a promise to make him walk again, Mills agrees to volunteer. 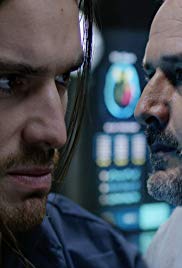 A three-part series featuring Fearless presenter, Kurdt Greenwood, as he gets up close and personal with the 12 most deadliest snakes in South Africa.

An epic mega-hunt has been discovered in the waters of False Bay, South Africa. Six deadly and intelligent killer whales hunting 5000 common dolphins. It's an extraordinary annual spectacle with thousands of animals making the ocean boil with white water as they race across the bay. Following them is a team of experts, determined to keep up and for the first time film this major event. Central to their quest is the goal of understanding why this high-energy, explosive event is happening here.

There is an electric grid submerged deep within the Amazon River, made up of a fascinating community of fish that have technological superpowers. Biologist Will Crampton ventures into this world, one which few have ever seen, on a mission to find, catch, and study electric fish. Armed with his own electric devices, join him as he uncovers the fighting style of the jaw lockers, the navigational skills of the knife-fish, and the remarkable hunting technique of the electric eel.

Lions and spotted hyenas may be South Africa's apex predators, but to animal behaviorist Kevin Richardson, these fearsome carnivores are among his best friends. See how this relationship plays a key role in a groundbreaking project led by some of the world's top wildlife biologists: a series of remarkable experiments designed to measure both species' social intelligence. Observe the different ways lions and hyenas approach and solve problems, and how they rely on cooperation to succeed and survive in their natural environment.

Follow some of the planet’s strangest hunters through their hunting trials and tribulations as they target and stalk prey.

We travel to 10 shark hot spots and reveal 10 spectacular kinds of shark feeding behavior. Each location shows how sharks have developed amazingly diverse ways to do what sharks do best – hunt down and catch their prey. They may be the ocean’s top predators but sharks still face great challenges in grabbing a meal. We’ll see how the special conditions of their preferred hunting grounds affects every aspect of the hunt, from their body design to their behavior.

The remarkable story of Solo, a wild dog who loses her entire pack to lions. We follow her in her search for a new family, with some surprising twists along the way.

White Lions, Born Wild is a true wildlife story, with strong characters and closely studied behaviour. We follow the cubs’ progress as they embark on the pathway to adulthood, learning to hunt, learning to avoid danger, learning to live in their white coats. This is a strong behaviour-led film, a coming of age story of a very rare and unusual pair of lions. Through their eyes we will learn what it’s really like to be a lion in Africa.

Part 1: Against all Odds

THE TOMORROW OF ZIMBABWE (2013)
For Carte Blanche
Subniv Babuta

THE JOURNEY (2011)
A FIFA commission
With Bruce Muirhead

SQUID VS WHALE (2010)
Off The Fence
Joe Kennedy

‘WHEN THE WAR IS OVER’ (2002)
Documentary (52’)
A story about the Cape Flats Gangster world
Directed by Francois Verster
Winner Stone award (gold) for music.

About 30 other wildlife documentaries

SONATINA FOR DOUBLE BASS AND PIANO (2016)

SONATINA FOR COR ANGLAIS AND PIANO (2016)

Commissioned by David Orr and the Epworth School, Pietermaritzburg.

Commissioned by Mark Mitchell and the choir of Diocesan College, Cape Town.

For choir, soprano solo and organ. Commissioned for Roedean School

For double chorus (in Xhosa), commissioned by the choir of Val-de-Grace, Paris

MASS FOR CHOIR, ORGAN AND CONGREGATION (2000)

For Garmon Ashby and the choir of Diocesan College.

For harpsichord and African percussion, Commissioned by Elizabeth Chojnacka.

Premiered at the Gulbenkian Foundation, Lisbon

Christmas carol, for Richard Cock and the Chanticleer singers.

Commissioned by the Music Group Of Manchester. First performances in The RNCM Manchester and the Purcell Room London

For chamber ensemble, commissioned for the Mill House Festival, Oxfordshire

Setting of a poem by Denis Brutus for tenor and orchestra

For cello and piano, written for Rohan Da Saram and Lise-Martine Jeanneret

For soloists, choir, organ and orchestra

A setting of a poem by Dylan Thomas